FEEDSCREWS AND HALF- NUTS
By Nipper

As briefly mentioned in Back to basics 3, feedscrews are found on most good quality Cylinder Phonographs, and also on some disc machines. Feedscews are basically threaded rods, which mathematically correspond to the grooves in the recording. When the reproducer is lowered onto the revolving cylinder the half-nut engages with the feedscrew, which is also revolving, it moves the carriage and reproducer across the record surface. Half -nuts, are literally half a threaded nut, although on some machines this is a knife-edge.

For any cylinder machine to function correctly, the drive belt from the motor drive shaft pulley to the mandrel pulley, must not be too slack, causing the belt to slip, in this case the belt should be either shorted or replaced, also check the belt-tensioning device is operating correctly where fitted. The half-nut should also be correctly adjusted, this is achieved by an adjusting screw on most machines or by bending the half-nut arm, the half-nut should engage with the feedscrew with light pressure when in the 'engaged' position, so as not to cause to much drag, slowing the machine when the reproducer is lowered. The feedscrew should be kept very lightly oiled. 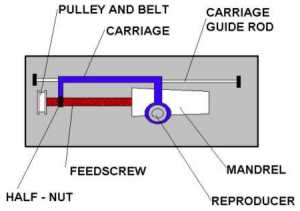