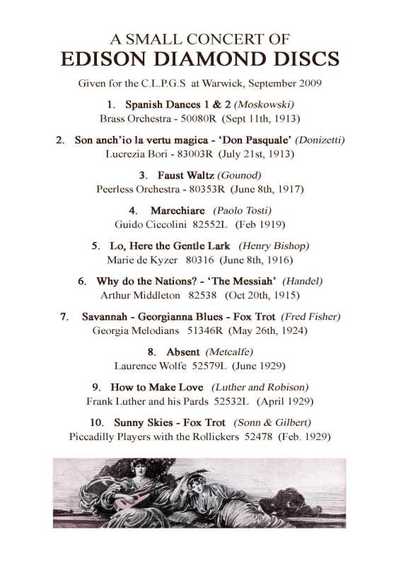 (September 11th, 1913). Moskowski (1854-1925) was a German composer of Polish descent. Besides composition, he had a successful career as a concert pianist and conductor. He taught in Berlin for many years, then moved to Paris in 1897 where Thomas Beecham, among others, was his pupil. The suite of Spanish Dances was originally written as piano duet, but was later arranged for orchestra, a version of which you hear here.
FAUST WALTZ  (CHARLES GOUNOD)
played by the Peerless Orchestra – 80353R
June 8th, 1917.

A spirited interpretation of the waltz theme from Gounod’s opera, ‘Faust’ giving some idea of the sound quality once heard from Edison discs. The recording was dubbed onto the Blue Amberol cylinder # 3874.

Edison is known to have remarked that jazz sounded better played backwards! With such enthusiasm at the helm, it is little wonder that Edison is not renowned for jazz and hot dance recordings. Yet there are a great many hot dance, jazz and blues recordings lurking in the catalogues for collectors patient enough to identify them. The Georgia Melodians originated in Savannah, Georgia in early 1923. Once up and running, they established themselves in a Carolina coastal resort for the summer season. After this, they worked their way up the coast reaching New York City in early 1924. At the time of their first Edison recordings they were working at the Cinderella Ballroom on 48th and Broadway. In September that year, they moved to the Strand Roof for a few months then broke up after playing the New Year's Eve Ball at the Hotel Alamac, NYC. In spite of the break up, new titles by the presumably reformed band continued to be issued by Edison until 1926.

Edison held out as long as he could against the new electric recording process, declaring that it could not record without distortion. His copywriters backed up his judgement by saying surely Edison who has worked with electricity more than anyone else must know what he is talking about. Finally in 1927, the company adopted the new microphone recording system. You may judge for yourselves in these last three tracks how much of an advance it was.

Published by Boosey and Co in London, c. 1899, this beautiful late Victorian song benefits greatly from the new recording system which permits a crooning style of singing. Earlier recordings, though fine, lack the intimacy of this thoughtful and tender piece.

This lively number lies surely at the other end of love's spectrum from the preceding track. Enjoy this lesson in courtship from Rubesville!

Frank Luther Crow (1899-1980) was a versatile musician, singer, composer and accompanist from Kansas. In 1927, he toured the British Isles as one of a quartet called 'The Revelers'. Between 1928 and 1932 he teamed up with fellow Kansan, Carson J. Robison, recording popular country songs. He then formed a country music trio with his wife, Zora Layman and a baritone named Leonard Stokes. Besides country music, he recorded hundreds of vocal refrains for dance records during the 1930s.